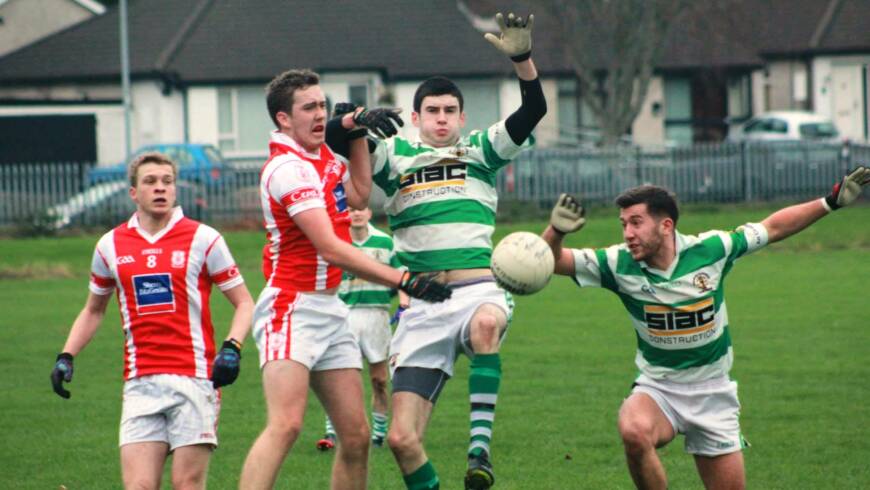 Speed of attacking proved the undoing for Cuala in the Under 21 C Football Championship quarter final and a semi-final now awaits against Naomh Mearnóg, writes Mick McGlynn. Peter Parker pics are on Towers flickr page here.

A week on from his goal-scoring exploits from the 21 hurlers Eric Finn was again rattling the net and on this occasion he netted two of our five goals. Joining him in the goalscoring stakes was Stephen Bracken with a first half brace and Davey McCarthy.

Cuala opened the scoring after three minutes from a 30 metre free and enjoy the initial supremacy before Towers settled into their stride. McCarthy won a break from kick out and freed Micheál Walsh on the run who kicked our opening point from the left from distance. Another Cuala free edged them a point clear and Finn then resonded with an excellent point. Fergus Callaly won at midfield and worked it to Finn who broke at speed before kicking accurately under pressure from 30 metres. Excellent combination play from the forwards brought the third point. Niall Lanigan dribbled up the left at pace and offloaded to Finn. Walsh was on-hand to support and he flicked to McCarthy who curled it with the right with defenders bearing down on him.

12 minutes were on the clock and both sides were evenly matched. The opening goal was a major boost for the home side. Bracken broke in behind the defence and placed it beyond the keeper. It struck the left post but edged over the line. Cuala responded with another free before Bracken’s second goal arrived on the 17 minute mark. Thomas Galvin cut inside on the right and rattled the post. It deflected across goal and Bracken was on hand to finish to the empty net. Cuala again persisted – a free narrowing the margin to five – 2-3 v 0-4. Finn broke clear and was pulled down and McCarthy kicked the subsequent free. Before the break another two Cuala points narrowed their deficit to four – 2-4 v 0-6.

It was a game of tight margins, with both defences strong at closing down and bringing pressure to bear upon attackers. Goals would be crucial and straight from second period throw-in Towers netted. Callaly carried from midfield and Lanigan carried at pace up the right. He cut inside and Walsh and Callaly again supported before Finn from the penalty spot turned sharp and struck to roof of the net. Towers again attacked with pace. Aaron Whelan won in full-back line and Walsh in half forwards released Lanigan. He dribbled in on goal and flicked to Finn who again struck powerfully to leave keeper no chance. Cuala did respond with a goal but consistently the pacy direct attacking of Towers had Cuala retreating. In defence Seán O’Donnagain at full back and Gary Quinlivan at centre-half were to the fore in repelling attacks. Second half sub Kevin McGibney influenced proceedings. The fifth goal arrived with 20 minutes still remaining. Alex Darbey from half backs carried and found Walsh with an excellent pass. Again Walsh found the pass with Lanigan in space. He drew defenders before slipping to McCarthy. From tight angle he struck unstoppable shot beyond keeper. It was effectively game over. Cuala struggled to cope. Callaly was on the end of a move but his effort on goal was blocked and Finn sidefooted just wide of the post. Cuala tried for goal from short-range frees but struck wide. When they looked set to net a second keeper Darren Core pulled off a brilliant save, palming the forward’s low drive to away from danger. In the final ten Shane Boland arrived from the half backs to kick an excellent point from right and considerable distance. Minutes later he was then supporting attack to kick a second from the 21. On the stroke of full-time McCarthy finished a very impressive Towers performance with a pointed free. An excellent team performance and the lads are now in the final four.