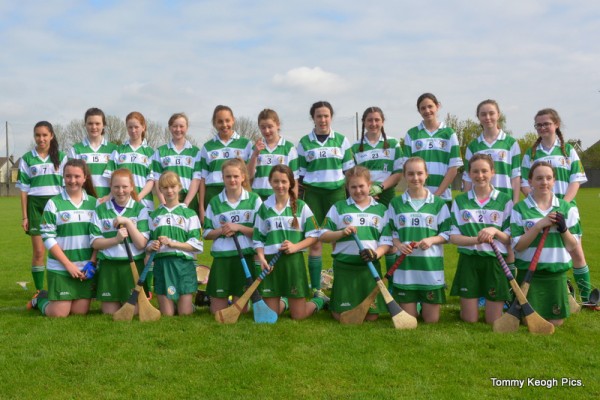 A beautiful Spring morning in St Anne’s Park Raheny saw our U15 Camogs take on their old nemesis Raheny in their latest league encounter.

The 2 teams had met each other somewhere in the region of 8 times in the previous 18 months in league/championship and Feile and had also played each other the previous day in the Ladies Football League. So like Dublin V Mayo and Cork V Kilkenny in Camogie, these teams are very familiar with each other and although the rivalry is fierce it has always been respectful and sporting.

The game started with both teams sizing each other up, but after 10 minutes, Towers found themselves 2-2 to no score behind thanks to some clinical finishing and excellent attacking play from the home team.  However, Towers did not panic and got themselves back into the game with 2 excellent worked points from Megan Hoyte and it wasn’t long before we then hit a power play with another 3-2 being scored with goals from  Hoyte, Kate Whelan and Rachel Condon giving us a deserved lead at half time (3-4 to 2-2).

Raheny started the second half slightly stronger and got themselves back into the game with the first point of the second half, but Towers responded with another two excellent points from Hoyte and Whelan.  Again Raheny responded with a goal and it looked like it was going to be another epic battle down to the wire.  But Towers were never going to make it easy for them with Niamh McGrattan, Aine Byrne and Lucy Cullen all working really hard and some great defensive play from Abbey Maher and Saoirse Ng in the full back line plus some excellent saves from Karla Meehan.

Towers then made a significant switch and moved Holly Gregg into the forwards with Megan dropping back to half back. This proved vital as along with the constant menace of Aine Mitchell and Aisling Walsh in the forward line, it allowed Gregg to work her way and score a vital goal which along with two other tagged points from Whelan saw Towers come out victorious, despite a late deflected goal from Raheny.  A great victory and a double over Raheny as the footballers had beaten them the previous day.

Towers are two from two in the league now and next up is reverse home fixture against Lucan on the 8th April.