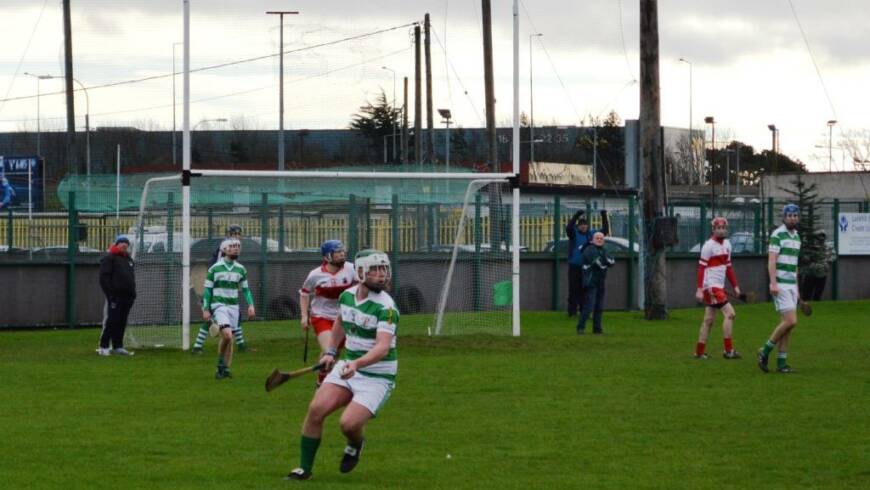 Under 21 B Hurling Championship Semi-Final; Whitehall Colmcille 1-17 v Round Tower 0-7

A tenacious championship semi-final ended with Whitehall Colmcille’s awaiting a county final and Towers nursing a loss at the penultimate stage of the competition. It was a gritty battle and the final score reflected the home sides more clinical streak in score taking, writes Mick McGlynn. View match pictures here.

Towers opener was courtesy of Eric Finn and an Alex Darbey free edged them two clear. But Whitehall responded as the half developed and were 0-7 v 0-4 clear just before the break. Darbey again was the Towers point scorer after Adam Doyle’s smart pick up around the middle led to a foul on him that was successfully penalised.

Four minutes into the second period a 65 edged the home side clear. Towers responded.  A Darbey sideline was fielded under pressure by Finn and when he was fouled Darbey pointed the free into a strong crossfield wind. Towers were dogged in their defending, with Gary Quinlivan commanding at centre back. Alongside him Aaron Wynne epitomised the grit of the Towers side in carrying the fight to the visitors. When Dublin dual-star Cormack Costello broke through on goal the full back line of Cillian Nolan, Jack Whelan and Ciaran Brennan smothered and Quinlivan drove clear. The match was being played from one end to the other and scores were at a premium in tough windy conditions. Costello was a talisman for the homeside throughout, and was operating at full-forward. But Towers full-back Jack Whelan was excellent at marshalling his threat. When Costello did break in on goal mid-way into second half Quinlivan back tracked to hook at crucial stage. But the follow-up was pointed by half-forward number 12. Towers were resilient. Doyle picked well in the middle and carried under pressure before being fouled. Again Darbey did the honours. But two quick scores by Whitehall – one an excellent strike by Costello under pressure on the right sideline – brought some considerable distance in such a tight game. Towers continued to attack but struggled to create opportunities in the inside forwards. The decisive score arrived 12 minutes from time. Whitehall corner-forward found space in the left corner and he drove across goal for the onrushing number 10 to bat to the net. Now nine clear – 1-11 v 0-6 – they finished in style, striking six points. Darbey went for goal with a late free that Finn deflected over. The game petered out but this was not reflective of the intense tussle that preceeded, with the greater composure of Whitehall forwards ultimately telling.