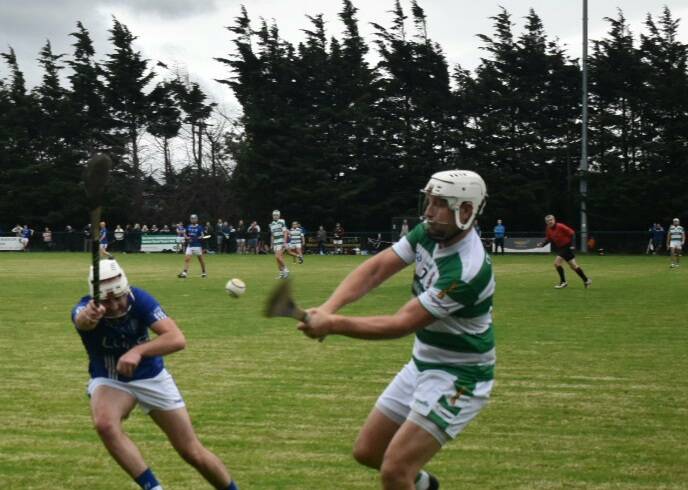 The pivotal moment arrived midway through the second-half. Towers were two clear in the dogged tussle, leading 0-11 v 0-9. Substitute Eoin Walsh provided what proved necessary daylight as the game moved into the final quarter. His goal 13 minutes into the half arrived courtesy of a superb fetch on the halfway line by Eoin Moran and Páidi Stapleton provided a great flick pass that led to Walsh taking a hit from the keeper but burying beyond him.

It provided momentum for the home side. A Joe Murray puck-out was fetched brilliantly by Eric Finn who turned and drove it between the posts. Walsh then stretched the margin to six, winning in the full-forward line and striking off his left.

But Crumlin were resilient. A long ball to the right of goalkeeper Joe Murray was superbly flicked across the line to narrow the deficit to three. But Towers displayed the fighting qualities that brought Championship glory last year. Alex O’Neill powered towards goal but had his strike was blocked by the keeper but Towers registered again through a Finn free. Liam O’Connor grafted to create an opportunity for O’Neill to carry and release to Finn to strike again.

Moving towards stoppage time, Crumlin struck two minus reply. Time ticked beyond the 60 minute mark and the visitors pushed for a goal to equalise. Two close-range frees presented opportunities but both were repelled by Towers defenders before the final whistle was sounded.

The first score registered by Towers came from the industrious Eoghan Young, canceling the Crumlin opener. Two excellent O’Neill 65’s opened an early advantage. An outstanding team score saw Gary Quinlivan sell a dummy on the Towers 40, switch crossfield to Eoin Moran who in turn found Alex O’Neill in support, and Liam O’Connor was on hand to shimmy and strike our fourth point. O’Neill was again deadly from a placed ball to edge us 0-5 v 0-2 clear but Crumlin enjoyed a dominant spell and the tie was level on the 19 minute mark.

Towers needed a response and Paidí Stapleton provided such, dispossessing an advancing defender and punishing. Finn struck a 65 from the right side before Crumlin narrowed the deficit to leave the advantage at the break to a minimum: Round Tower 0-7 v Crumlin 0-6.

An early let-off for the home side a minute into the second half when a penalty was conceded but driven over the bar. The visitors edged ahead but O’Neill plucked a puck out and drove at the retreating defence and powered over. A foul on Moran enabled Finn strike the placed ball between the posts and a series of sharp passes between Alex Doyle, Moran and Finn brought an opening for midfielder Jack Whelan who converted successfully. Crumlin continued to respond but a jinky run by O’Connor ended with a pull to the ground and Finn penalised from the free to leave the advantage 0-11 v 0-9. Walsh’s cameo was to follow. The win leaves our Senior Hurlers with two from two, with one game remaining. Next up is a trip to Castleknock on Saturday 8th August, with the Towers name already in the hat for the quarter finals.