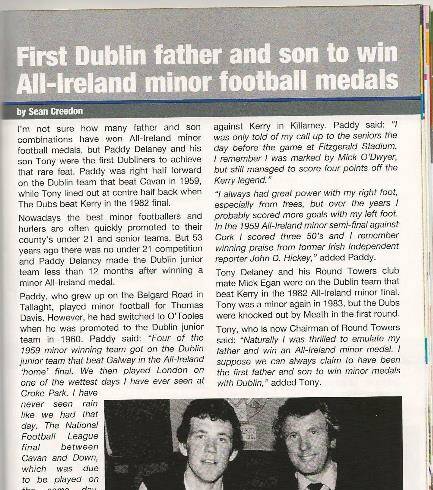 The following article appeared in the programme for the 2013 Leinster Football Final. It features interviews with our very own Paddy and Tony Delaney, the first father and son to win All-Ireland Minor Football Medals. Thanks to Sean Creedon for providing the clipping. The unedited version of the article can be read below the clipping.

I’m not sure how many father and son combinations have won All-Ireland minor football medals, but Paddy Delaney and his son Tony were the first Dubliners to achieve that rare feat. Paddy was right half forward on the Dublin team that beat Cavan in 1959, while Tony lined out at centre half back when The Dubs beat Kerry in the 1982 final.

Nowadays the best minor footballers and hurlers are often quickly promoted to their county’s under 21 and senior teams. But 55 years ago there was no under 21 competition and Paddy Delaney made the Dublin junior team less than 12 months after winning a minor All-Ireland medal.

Paddy, who is synonymous with Round Towers, grew up on the Belgard Road in Tallaght and played minor football for Thomas Davis. However, he had switched to O’Tooles when he was promoted to the Dublin junior team in 1960. Paddy said: ‘‘Four of the 1959 minor winning team got on the Dublin junior team that beat Galway in the All-Ireland ‘home’ final. We then played London on one of the wettest days I have ever seen at Croke Park. I have never seen rain like we had that day and the junior final would have been called off only that London had already travelled to Dublin. The National Football League final between Cavan and Down, which was due to be played on the same day, was postponed because of the downpour.’’

Paddy progressed to the Dublin senior team and made his debut in a Whitsun tournament game against Kerry in Killarney. Paddy said: ‘‘I was only told of my call up to the seniors the day before the game at Fitzgerald Stadium. We stayed overnight in Killarney and I remember I was marked by Mick O’Dwyer, but still managed to score four points off the Kerry legend.’’

‘‘I always had great power with my right foot, especially from frees, but over the years I probably scored more goals with my left foot. In the 1959 All-Ireland minor semi-final against Cork I scored three 50’s and I remember winning praise from former Irish Independent reporter John D. Hickey,’’ added Paddy.

Paddy has given a lifetime of service to the GAA in Dublin, but if there is one regret it’s that Round Towers has not contested a Dublin senior football final in 50 years. ‘‘We haven’t been in a senior final since 1965 when we lost to UCD and I would love to see us back in a county final again. We have had great success at under age level, but somehow we can’t get to a senior final.’’

Tony, a former Chairman of Round Towers said: ‘‘Naturally I was thrilled to emulate my father and win an All-Ireland minor medal. I have been involved with Round Towers all my life and I agree that it would be great to see our seniors playing in county finals. We now have a good under age set up and are not looking for instant success any more, just steady progress.’’

‘‘The club, which was formed in 1884, has always been based in the heart of Clondalkin Village. But we now have great facilities on the Monastery Road and we were delighted that Anthony Daly availed of those facilities for training when he was Dublin hurling manager. We have some great people involved with the club and we are all very proud of the Dublin football manager Jim Gavin, who has been a great servant all the way up from under 10 level.’’

‘‘One of my colleagues in the 1982 All-Ireland winning team was Mick Deegan and in 2012 the Deegans equalled our record when Mick’s son Michael came on as sub in Dublin’s All-Ireland final win over Meath. But I suppose we can always claim to have been the first father and son to win All-Ireland minor medals with Dublin,’’ added Tony.