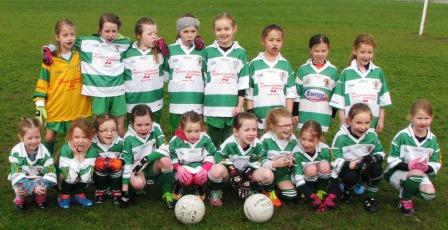 Round Tower’s Under 8 girls faced Skerries Harps in Skerries on Saturday September 13th, Match Report by Maria ShannonIt felt like a July morning rather than a September one for the first match back after a short summer break for the girls.They’d good opposition from Skerries Harps, who were on their home turf,  but were well able to hold their own in the two 20 minute matches.

Our defence did well in keeping the ball out with lots of great shots down to their midfield and forward line.There were some great battles in midfield, some balls were won, some lost but that didn’t affect our girls confidence and they kept on moving.

Our forwards faced a tough defence from the opposition but battled on to try and get their scores in.A big welcome to our new team members, some of whom togged out in the green and white for the first time after just one training session with the squad. They really got into the swing of things very quickly.New girls are more than welcome to come and join the panel, training’s at 2 o’clock every Saturday afternoon on the Monastery Road.