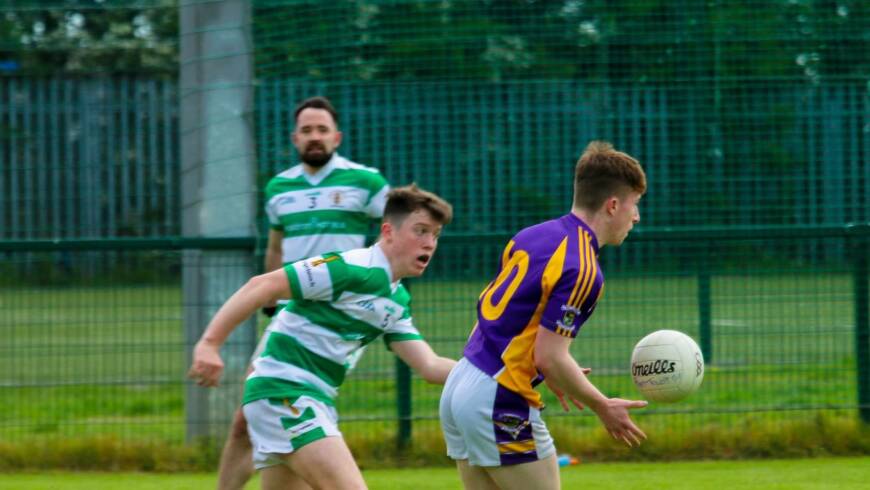 A strong finish in the final minutes saw off the challenge of neighbours St Pat’s of Palmerstown in an edgy contest that brought Towers a very important two points, writes Mick McGlynn.

A low-scoring affair saw the sides deadlock at eight points apiece with six minutes remaining. The match was marked by Towers striving to breakdown a packed defence and St Pat’s countering and having greater efficiency in registering scores.

With the sides tied on the 24 minute mark, patience was a required virtue. And it followed. Conor Flannery, Mick Hallows and substitutes Alex O’Neill, Kevin McGibney and Jason Murphy combined to create the opening for Eric Finn to kick from distance off his left. Around 20 passes were involved in the next score with Derek Murray and Finn breaking the rearguard to tee up McGibney to strike over. Towers had the impetus as the clock ticked into the final stages and were keeping possession to control the game. Tom Galvin struck for a point but his effort rebounded off the post. The rebound led to a free that Ian Ward, magnificent again in the Towers forwards, converted from a tricky angle. It was the final kick of the edgy contest.

Ward was the first to register a Towers score, equalising the visitors opener. Manus Smith followed it up following patient build-up from defence that involved Lee Moran, Barry Keane, Ward, Niall Byrne and Flannery. Working the ball into good positions in the inside forwards proved challenging throughout and Towers efforts were generally from the half-forward line. Three wides were kicked before Ward registered a 3-2 lead, with corner-back Jack Quinlan carrying well to set it up. Flannery won a 50/50 and Joey Leech, Moran and Murray combined up the right before Galvin cut inside and raised the arm of the umpire. But Pat’s finished the half strongly and went in trailing by a point 0-5 v 0-4. It could have been better for them when a strike beat keeper Gary Cleary but rattled off the inside post. It was the last kick of the half.

Similarly, the second almost started with a net. This time it was Towers to be denied. Hallows inside pass released Leech and his low strike for goal was deflected by the keeper over the bar. A mini-surge saw Pat’s restore parity but this was abetted by five wides struck by the homeside. The water-break provide some opportunity for Towers to clear their heads and they went into attack and a foul on Ward led to him striking the placed ball. What looked a turning point arrived moments later when Tom Galvin was fouled when a goal looked a certainty. But his penalty was palmed away by the keeper. The subsequent 45 was worked short between Ward and Hallows, with the former edging us two clear. But Pat’s notched two in quick succession to leave the game in the melting pot with six to play.

Towers late surge means they sit joint top of the Intermediate Championship Group 1, with a final group fixture to play against St Finian’s of Swords in Monastery on Saturday week, 15th August, with throw-in 6.30pm.