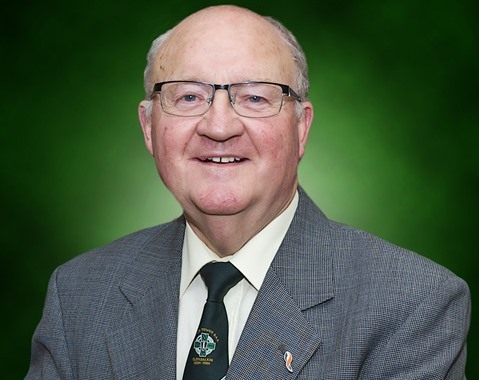 We are delighted to introduce a new feature on the club website – Club Legends. Club Legends will see Seán Creedon speak with club stalwarts regarding their memories of the club and provide an insight into its history. Round Tower GAA Club has a very rich history and heritage. Club Legends will compile recollections of significant moments from our times past and also anecdotes from some of our finest servants.This new feature will prove of interest not just for Round Tower Members but also the wider Clondalkin community. We commence Club Legends with our Club President. Thank you to Seán for bringing the feature together.

There’s an old saying that if you want to get something done you should you ask a busy person.

Well that’s certainly true of Round Tower’s president Tommy Keogh. Apart from his lifetime connections with the club as a player, mentor, administrator and photographer, Tommy is also heavily involved with the Clondalkin Round Tower Heritage Group, Tidy Towns Committee and the Clondalkin Camera club.

Tommy was born in 1938 and lived at 6 Convent View Cottages until he moved to his present home in Monastery Walk in 1963. Like several locals at the time he got the bus from Newlands Cross to St Michael’s National School in Inchicore and his secondary schooling was at the CBS in St James’s Street.

He played corner forward for James’s Street and one of his proudest memories as a player is  beating Ballyfinn of Laois in the Leinster ‘B’ Colleges final in 1956.

Tommy had got involved in club administration at an early age and was Secretary of the club by the time he was 21.

Tommy takes us back to the fifties. He said: ‘‘Towers club house on Convent Road was burned down in 1957 due to an electrical fault after a variety show. While the clubhouse was being re-built I remember attending club committee meetings in the Library on Monastery Road. .’’

‘‘During the fifties new housing estates were built at Newlands, St Brigid’s and Laurel Park. A lot of country people who worked in the Air Corps in Baldonnel and the Civil Service in Dublin City, bought houses and settled down with their families in these new estates. And it’s true to say that the arrival of the ‘new’ residents certainly brought a lot of talent to the club at playing and administrative level.’’

‘‘From the ashes, the club became invigorated. A re-organisation meeting was held in the Library and at that meeting a new committee was appointed to oversee the running of the club. Within a short time the first club constitution was written and adopted. Also in 1959 the clubrooms were re-built.’’

Another factor which helped the club prosper was the arrival of the Marist Brothers from Athlone in June 1957 to set up Moyle Park Secondary School. Dublin won the Sam Maguire Cup in 1958 when beating Derry in the All-Ireland final and Gaelic Football was on a high in the city and county. St Vincent’s who had provided the bulk of the Dublin team in ‘58, were one of the Dublin club teams who took part in a seven-a-side competition in Moyle Park.

Around the same time Tommy, Peter Byrne, Paddy Barrett and Johnny Kelly were among a group who set up a fund-raising committee that organised the first under 14 Street Leagues in the village. Thanks to the success of the street leagues the club organised a juvenile section and entered teams in the South County and South City Leagues. Further success followed through the age groups and there was also success at minor level and the bulk of that team went on to win the inaugural Dublin under 21 championship in 1964. Tommy was a mentor with the under 21 team, along with Joe Keogh and Dermot Delaney.

Tommy played on the team which won the Intermediate League in 1963-64 and gained promotion to the senior division. The club had the option of continuing to play in Intermediate Championship again, but opted to play in the senior football championship in 1965. There were wins over Clanna Gael, Good Counsel, O’Tooles and Civil Service all at O’Toole Park, before the final against UCD at Croke Park on June 25, 1965.

‘‘Sadly we lost the final 1-12 to 0-7, but it was no disgrace losing to a UCD team that included several inter-county players. I was a sub on that team and it truly was an historic day in the club’s history. Just last year I was lucky enough to get a video of the build-up to the game and action from the game in Croke Park. It’s hard to believe that 51 years on, we are still waiting to qualify for another senior county final. We are capable of producing excellent teams up to minor level, but somehow we just cannot keep the talent together for senior level,’’ said Tommy.

Tommy says that the club is very grateful to the Presentation Nuns and the Marist Brothers for the use of  playing pitches in Moyle Park and before that in the ‘Nun’s Field,’ which is now the site of Coláiste Bríde. ‘‘Over the years we also used pitches down at the 9th Lock in Clonburris and in Deansrath. Thanks to South Dublin Council we got to use the excellent facilities of the Community Centre in 1971 where we had two full-size pitches. Little did I realise that the club would end up with the fantastic set-up that we now have on the Monastery Road, just the puck of a sliotar from my own house on Monastery Walk,’’ said Tommy.

After finishing Secondary School, Tommy got a job in the Clondalkin Paper Mills where he spent 26 happy years. The Paper Mill closed and Tommy joined Cara Data Computing and by the time he took early retirement from Cara in 2001, he was Company Secretary of the Cara group of companies.

Tommy’s father Joe, who was vice-president of the club in the late sixties, always had a camera in the house and not surprisingly young Tommy wanted to take photographs also. ‘‘I bought my first camera in Currivans in Keeper Road in Drimnagh and I have photographed nearly every Towers team over the past 50 years. I’m a member of the Clondalkin Camera club and outside of GAA I really enjoy landscape, nature and wild life photography,’’ said Tommy

For many years Tommy was a volunteer photographer for the local Clondalkin Community newspapers, the Clondalkin News and the Clondalkin People. ‘‘I covered hundreds of community events and sadly I have witnessed the demise of several Clondalkin landmarks, such as the Clondalkin Paper Mills, Mount St Joseph on the Monastery Road, the Stores pub and the original Post Office on Main Street. These papers were produced voluntarily by Mary Brady from Laurel Park and Seán McGaley from Floraville,’’ said Tommy.

In recent years the Clondalkin Tower Heritage Group and the Tidy Towns group have taken up whatever spare time Tommy has. He is really excited about the Round Tower Visitor Centre. Work is well under way on the site and it’s hoped that the Centre will be open early in 2017. ‘‘When the Mill Shopping Centre opened and the Post Office moved down to the Mill from Ledwidge’s it really affected the heart of the village. We hope that the new Visitor Centre will help to link the two parts of the village,’’ said Tommy.

Tommy was nominated by South Dublin County Council for National Volunteer of the Year in 2014 and made it to the final eight. In 2002 he was awarded the ‘Hall of Fame’ by the club for loyalty and long service. His voluntary work was recognised outside of the club in 2007 when he received the Lord Mayor’s Youth Service Award from Lord Mayor of Dublin Vincent Jackson. In 2008 Tommy was elected as club vice-president and became club president in 2014.

All that voluntary work would not be possible without an understanding wife. Tommy married local girl Bridgett Brown in 1962. Bridgett is a former Camogie player with the club and was an active member of the club’s social committee. They have one son Desmond, who now lives in Gran Canaria. And for good measure Tommy was joint editor of ‘From the Monastery to the Boot’ a bicentennial history of St Joseph’s Boys National School and is presently working with Gerard Flanagan on a history of our club.

I asked Tommy what were the biggest changes he has seen in Clondalkin and in the GAA over the past 50 years ‘‘Well from what was once a small village has now expanded into a sprawling urban centre and I think the Luas is a great asset. It’s good to see South Dublin County Council paying special attention to the Village. To be fair if you come up with a good proposal the Council will give you a sympathetic hearing,’’ said Tommy.

‘‘I think former president Seán Kelly was the best administrator I have seen in the GAA. He was very approachable and worked hard to open up Croke Park to other sports, a move that financially was very beneficial for the GAA and showed great community spirit,’’ Tommy.

When a call for mentors came in the early noughties Tommy once again answered the call and took over the under 13 football team along with Gerry Browne and Mick McGreevey. As there was no under 12 team the previous year, Tommy and his fellow mentors were really starting from scratch. But they persevered. ‘‘The manner in which we progressed with that group is something that gives me great pride and satisfaction. That group of lads won League, Championship and Féile honours at under 14 and under 15 level,’’ added Tommy.

‘‘I have been involved as a mentor with many football and camogie teams in the club down through the years and I can safely say that Richie Doyle from the 2003 group was one of the best juvenile players I ever  managed. But if you are looking for the best young footballer I ever encountered in the club at Juvenile level, then I would have to say Neil ‘Corny’ O’Donoghue, who went on to become a successful American Football player with St Louis Cardinals.’’

So looking back what are his stand out moments from a lifetime with the club? ‘‘Well winning the first Dublin under 21 football championship in 1964 was certainly a moment to treasure. Also being selected as Chairman of the Centenary Committee in 1984 was very special. And continuing to organise the annual club Mass for deceased club members since 1978 gives me great personal satisfaction.,’’ said Tommy