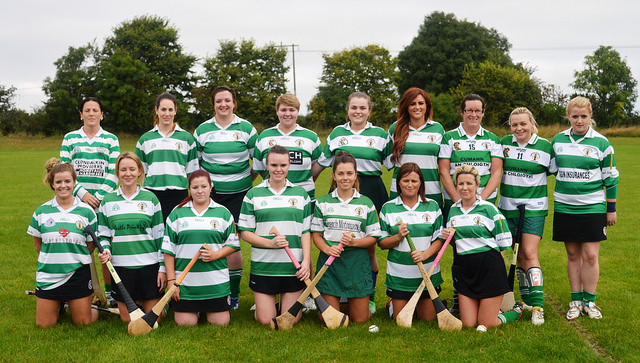 Round Tower Senior Camogie ladies came out the wrong side of a tight affair in their Dublin Senior Championship clash v Craobh Chiarain, writes Mick McGlynn. View pics online here. In an exciting contest in which the momentum swung for and against both sides throughout, the goal taking of the home side proved just about enough at the final whistle.

Towers started on the front foot hit two early wides before Caroline Fallon with a free from the 40 metre line opened the scoring. Both Ciara Ryan and Niamh Murphy advanced on goal but were blocked off at vital stages but Jade Hyland was not denied in the sixth minute. Ryan’s clever handpass over her shoulder freed Val Kelly to drive towards goal and the keepers block was followed to the net with a ground stroke by Hyland. But Craobh Chiarain responded. Karen Cassidy in the Towers goal made two good blocks but a high dropping strike into crowded goal beat her. When Kelly won a high ball a chop down led to Murphy pointing a free from 21 and a red card for the home side. Murphy again raised the umpires arm after Ryan won a puck out and her good run on goal was halted when she was pulled back. The home side responded with a point but Towers again struck a goal. Sinead Kearns won around the middle and fed to Murphy whose strike towards goal was gathered by Fallon and she finished to the net. Over the opening 20 minutes Towers were a step above the home side but a scrappy goal left them leading by just two and a high ball flicked to the net let them trailing 3-2 v 2-4. Just before half-time Fallon levelled when she pointed a 40 metre free.

Chiarain were straight off the mark in the second half with an early point. Towers responded when Ryan, whose direct running caused problems for the home side throughout, ran at a retreating defence and her effort was blocked but Kearns pointed the resulting clearance from distance. Murphy then pointed from a dead ball after Aoife Dunphy and Kelly pressured well to win back possession. But the home side edged two clear when a free from the 21 was struck to roof of the Towers net. Kearns  then freed Ryan on the 40 and her great solo run led to a point. Another free from Fallon left Towers trailing by a point 4-4 v 2-8. A Chiarain forward bore down on Towers goal but Kearns hooked brilliantly but three minutes later the home side netted their fifth after a free was seized by corner forward and driven beyond Cassidy. With four minutes remaining Towers went for goal and Ryan and Kelly made inroads but were crowded out. Dunphy picked up on the run and passed to Ryan who was pulled back and Murphy pointed the free. With seconds remaining Murphy drove a 21 metre free towards goal but it was tipped over. The final whistle sounded on the keepers puck out.  Final score 5-4 v 2-10.