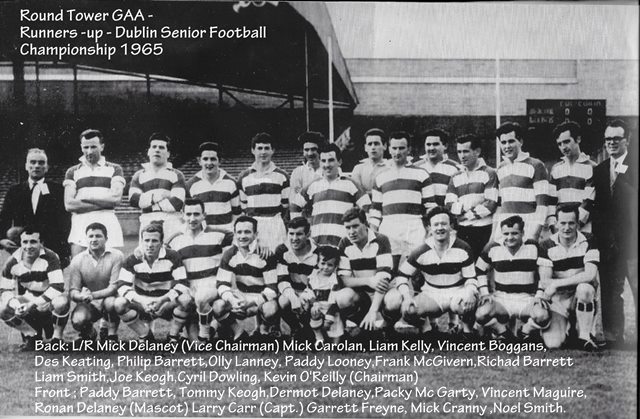 It’s now 50 years since Round Towers qualified for their first, and so far only appearance in a Dublin senior football championship final, Sean Creedon writes. On June 25, 1965 Towers were beaten 1-12 to 0-7 by UCD in the final at Croke Park.

Despite the final defeat, it was a great achievement for a young Towers team to reach a county final, especially as Towers were, like now, a division II team at the time. And losing to a UCD side that contained several inter-county footballers was no shame. Indeed the debate continues as to whether the Belfield students should be allowed to play in the Dublin senior hurling and football championship.

The 1965 Towers had a great group of players and naturally were compared with the team from 1926, who has won the Junior League and Championship double. And there was a connection with the ‘26 team as Cyril Dowling’s father Billy was a member of the team from the twenties.

The road to the final started with a shock 2-11 to 2-10 win over Clanna Gael at O’Toole Park on Sunday March 14. The ‘star-studded’ Clans were one of the top teams in Dublin back then with players like Mickey Whelan, Bobby Burns and Gerry Davey in their team.

Clans had difficulty coping with the young Towers team, for whom Packie McGarty and Mick Cranny were the goal scores. A late goal from Longford-born Bobby Burns gave Clans hope and Gerry Davey had them level in injury time. But a point from a free by Paddy Delaney saw the Clondalkin team progress to the next round.

As you may have read earlier on this website there were two controversial incidents in this game where the referee incorrectly disallowed ‘scores’ by Towers Ger Dowling and Clans’ Mickey Whelan. Dowling’s 14 yards free in the first half came back off the crossbar and Whelan’s penalty in the second half also came back off the woodwork. The referee interpreted Rule 142 wrong, thinking that a player could not touch the ball again if it hit the post or crossbar.

O’Toole Park was very a very popular venue for Dublin club games in the sixties and all four of Towers games on route to the final were played at the Crumlin ground. In the second round Towers had a comfortable 2-6 to 0-6 win over Good Counsel, who finished the game with 14 men. Referee Jim Shannon, who also refereed the final, sent off one of the Good Counsel players in the second half and naturally that didn’t help their cause. Towers scorers against were: Packie McGarty (0-4), Mick Cranny (1-0), Joe Keogh (1-0), Cyril Dowling (0-2).

Towers opponents in the quarter-final were O’Tooles, for whom Paddy Delaney had previously played. And it was Delaney who played a huge part in the 1-10 to 1-6 win on May 2nd.  Paddy converted nine frees from what were described as ‘various angles and distances.’ Towers goal came from the head of Vinny Maguire, who also played League of Ireland football for Waterford and St Patrick’s Athletic. The previous November Eamon Breslin had made history when he became the first player to score a goal with his head for Dublin against Laois at Croke Park.

Next up in the semi-final were Civil Service, who were beaten 1-9 to 0-11. Towers led by two points at half time and midway through the second half they had stretched the lead to six points. Late in the game O’Tooles were awarded five frees, all of which were converted by Danny O’Brien and Towers just held on to qualify for their first-ever final by the minimum margin. Towers scorers in the semi-final were: Vinny Maguire (0-4), Paddy Delaney (1-0), Cyril Dowling (0-3) and Packie McGarty (0-2).

Towers had great support at the final as 300 local school children were ‘bussed’ to Croker. But it was to be the older students of UCD who were celebrating as they won their third final on a score of 1-12 to 0-7.

Mick O’Shea and Mick O’Brien were on top at midfield for UCD, but playing with the aid of a slight breeze Towers led 0-4 to 0-3 at half-time. Seán Murray had the students level within a minute of the restart, but Towers took the lead again with a point from a free by Cyril Dowling. However, points from former Louth star Benny Gaughran, Davy Doris and Mick O’Shea saw the students pull away. Cyril Dowling scored six of Towers’ seven points and Vinny Maguire was the other scorer.

Coincidentally one of Towers best performers on the night was UCD student Garrett Freyne.

According to Peadar O’Brien in the Irish Press, Towers didn’t help their cause by kicking too many high balls into their forwards and O’Brien also said that the Towers selectors waited too long to move Packie McGarty out from full forward.

Thanks to Sean Creedon for excellent report and to Vincent Halpin for providing cover of the final programme – see below.